I was once told that I painted like a miniaturist, but on a large scale.This made me think 'Why don't you try painting one or two miniatures for a change.' Once I started miniatures seemed to take over my life. I spent the whole of winter 1997/98 locked away in my studio producing twenty four little paintings. I live in what is reputed to be the highest village in England, and while the wind was blowing the snow, and sometimes blocking the village from the outside world, I was in my own little world painting little pictures. To me a small watercolour painting was A3, and 6ft. x 4ft. was nothing unusual, so to start painting 3ins x 2.5ins. came as a challange.
My first problem was deciding what media to use. As my large works were in water-colour I saw no reason to change. I new the technique involved and could therefore concentrate on the formal problems. I firmly believe that if you have an idea or philosophy that interests you and that you really believe in, you will persevere until you find a way of communicating that idea. The water-colours used were mainly tubes, for no other reason than that was what I already had available. I used Bristol board as my support, and used sable brushes nos. 000,0, and4.I cut my support slightly larger than my painting surface in orde to make a boarder with masking tape. This was to set off the completed work with a white border between the painting and the mount.
The basic technique was no different from painting large paintings. I lightly drew in the main shapes with pencil, and then worked from light to dark, using washes to block in the general. As the painting progressed I used tiny dots of paint to bring out the detail. The white of the paper was left for most of the highlights, although I did use gouache when I thought that it was needed. As with the large paintings I used my camaras viewfinder to work out most of my compositions. Since my eyes deteriorated a number of years ago I have become more reliant on my camara, in fact I sometimes say that my sketch book is a Canon. Out of three rolls of film I usually manage two or three frames that are of use to me. I like to be able to see more than the my audience so I paint under an angle light with a strong bulb, and a magnifying glass attached to my spectacles. I never use a daylight bulb because most pictures are not viewed in daylight. The first painting I did was a landscape, which I chose to paint because of it being an atmospheric subject with little detail. The finished painting was, I thought, quite successful. I painted another two landscapes which worked quite well. This gave me the confidence to attempt a detailed still life painting. When I paint my large pictures, because of the size and because I like to paint on a flat surface rather than at an easel, I usually turn the painting upside down and complete the top half of the painting before turning it the right round to complete the lower half of the painting. In order not to lean on completed painting I work downwards from top left to bottom right, completing each part of the painting before attempting the next. I know all of the arguments for not working in this manner, but it works for me. Although I was working on such a small scale I still worked in sections, dictated by the importance of the individual objects in the painting, completing one section before moving on to the next until the composition was complete.
When spring eventually arrived I had completed twenty four paintings. My next problem was to think about mounting and framing. I decided to give the paintings plenty of space and so double mounted in ivory, with a gold line on the outer mount. The frame I chose was a substantial, smoke grey colour.The end result was that the paintings sold well at the next exhibition that I had, and the prints that I had taken off them are still selling well.
'Will I ever paint another miniature?' The answer is probably yes, but I definitely will not paint twenty four in a row again. I enjoy the scale and breadth of the larger painting.

The above article was written a number of years ago and was published in "The Artist". Since then I have had eye operations and can see quite well now. 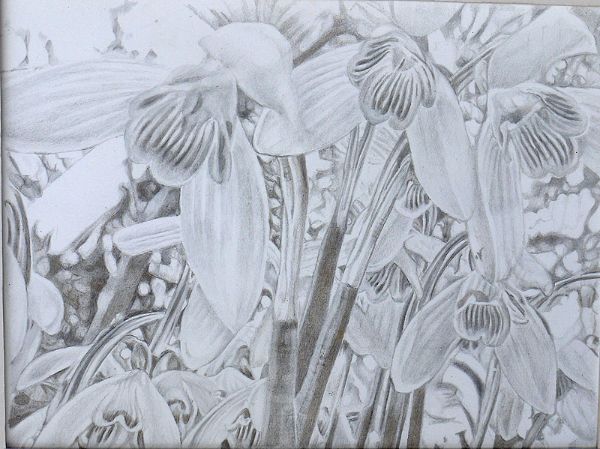